Ever said to yourself “What I really need is a cozy mystery in which an asexual, aromantic demi-girl teams up with a nervous posh twink and together they solve crime at Halloween?” Murder of a Working Ghost may be the book for you.

It’s all set up and available for pre-order here

A murdered specter. An unwanted suitor. Malice at the Museum.

Halloween approaches and in the ancient capital of the Fens, Haley Thorpe is working as a costumed actor on a ghost tour. When one of the other ‘ghosts’ is murdered by a cunning device, suspicion falls on Haley—the only one unobserved at the scene.

If that wasn’t enough, Sean, the guy her parents think she should marry, is turning into a regular stalker. She doesn’t want to date him. She’s not sure she wants to date anyone at all, but does she have a choice?

Can she and Rory—her posh house-mate—figure out the real murderer before she gets arrested? And can someone tell Sean that he’s not all that before he starts breaking down the door? 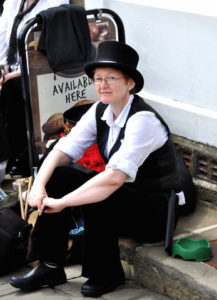